Can we ligate the celiac trunk?

Branches of the aorta used to be considered vital for the circulation as they often supply a large amount of other vessels. Ligating intercostal or lumbar branches is commonly accepted to be safe if needed. However, the major ventral branches of the aorta were generally thought to be more important. Occlusion of the inferior mesenteric artery (IMA) is being practices routinely ever since the introduction of the endovascular aortic aneurysm repair (EVAR) with often only transient mucosal ischemia of the sigmoid colon observed in about 10% of the cases.

While the occlusion of the superior mesenteric artery (SMA) is widely accepted not to be compatible with life, ligating the celiac axis may be an interesting approach to explore. 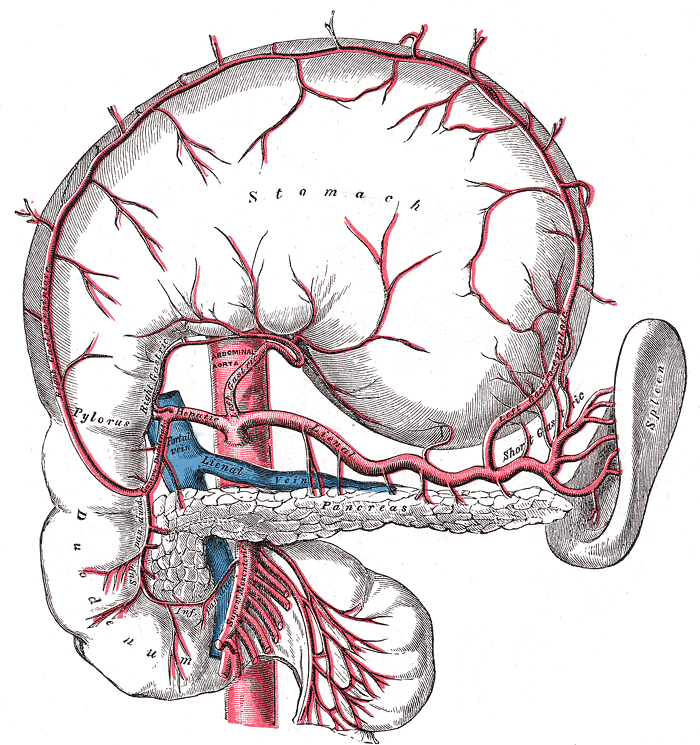 The three branches of the celiac trunk are:

What happens if we ligate any of these branches?

Left Gastric Artery Ligation
Ligating the LGA is thought to be safe practice and is performed commonly as part of other procedures, e.g. in the mobilization of the stomach in esophagectomies. The stomach is so well vascularized, that ligating of any three of its four main supplying vessels is considered safe.
The LGA is the origin of aberrant left hepatic arteries. Even in these cases, ligating the LGA does not generally lead to any significant consequences (see below my thoughts about the significance of the hepatic arterial supply).

Splenic Artery Ligation (SAL)
We know that ligation of the SA does not lead to splenic necrosis. There are multiple indications for SAL, e.g. splenic artery aneurysm, splenic artery steal syndrome in liver transplantation, even splenic injury. It has been described in distal pancreatectomies (Warshaw's technique, after MGH's Andrew Warshaw).
We think that the splenic circulation undergoes some sort of reorganization after SAL as some cells inevitably die and neovascularization occurs originating mostly from the short gastric vessels. But the spleen does not become necrotic and continues to function.

Common Hepatic Artery Ligation (CHAL)
The arterial blood flow is about 20% of the hepatic blood circulation and provides about 50% of the cell oxygenation. The hepatocytes do not become ischemic if there is no arterial blood supply to the liver. I know of experienced Asian liver transplant teams taking a break (literally walking out of the operating room) after the portal vein anastomosis before performing the anastomosis of the artery. I have heard hepatobiliary surgeons arguing that these facts about the hepatic circulation allow us to ligate any hepatic artery with impunity. However, they miss a point.
While the hepatocytes don't have to rely on arterial oxygenation, the cells of the biliary tree do. There is no other oxygen supply for the bile ducts, including the intrahepatic ones, then the arteries. The resulting recurrent episodes of cholangiopathy after ligating of the left, right, or proper hepatic arteries (PHA) may lead to liver resection or even the need for transplantation. Therefore, there is no place for impunity here.
Ligation of the Common Hepatic Artery is permissive for another reason - the Gastro-Duodenal Artery (GDA). We know that there are patients who have the main supply of the proper hepatic artery coming from the GDA and this is the reason we test the flow of the PHA while the GDA is occluded, e.g. in Whipple procedures, before ligation of the GDA. The connection between the SMA and GDA is well known over the superior and inferior pancreaticoduodenal arteries and, as in cases with Median Arcuate Ligament syndrome, reversal of the flow is observed. This effect allows most likely for the safe ligation of the CHA.

Review of the Literature

PubMed search for "celiac ligation" reveals 229 entries as of today. I am attempting a review of the English speaking papers with available abstracts or full-text articles including some publications I have found using regular Google search which were not part of the PubMed results.

Secondary circulation bypassing the main mesenteric vessels was described as early as 18691. In his short paper from 1956 Owen2 describes ligation of both the Celiac and SMA with good outcome. Based on angiography, he discussed that the visceral circulation was maintained over the IMA and lower intercostal branches.
Appleby 3 reported thirteen cases of celiac trunk resection as part of extended surgery for gastric cancer. None of his patients were found to have any abnormality of the liver function tests and the mortalities were due to cancer recurrences.
Maetani 4 demonstrated good outcomes in ligation of hepatic arteries in 6 patients with review of the literature including 36 more patients. The authors argue that more proximal ligation results in more favorable outcome which is expected since this preserves potential collateral circulation.
The feasibility of celiac trunk ligation is discussed in a paper by Miller5 based on a report of a patient with celiac aneurysm. He was mainly concerned about postoperative liver function abnormality which was not observed. Again, proximal ligation, allowing for collateral circulation, was considered an important factor for positive prognosis.
Resection of the celiac trunk with ligation of all three branches (as opposed to ligating the trunk only allowing communication of the branches) was reported by Hertzer6. He argued that reconstruction of the hepatic arterial flow was not necessary since the flow from the GDA was sufficient for supplying the PHA. The first systematic radiographic study of hepatic arterial supply after [common] hepatic artery ligation was published by Koehler7. The following collateral circulatory pathways were found:

Collaterals were found as early as 4 hours after surgery and were demonstrated to increase in size and number within the next 6 months.

Multiple case reports and short series of Celiac trunk ligation for trauma or aneurysms were published without any negative outcome8-14. In one case12, necrosis of the gallbladder was observed, most probably as a result of a low flow situation in an end-artery. Successful treatment of uncontrolled upper gastrointestinal bleeding of unknown origin by ligation of the Celiac trunk was also reported15.

Intentional overstenting of the Celiac trunk as part of thoracic endovascular repair of aortic aneurysm (TEVAR) is now performed without major concerns as several reviews report16-18.

Ligation or overstenting of the Celiac trunk is feasible and widely reported by the literature to be safe.